The world’s governments and organisations are in great need of high security vaults to protect all manner of items. Whether it’s for the protection of gold and monetary reserves, precious artefacts or government secrets; take a look at our list of some of the most secure vaults in the world.

So where Are The Most Secure Safes In The World?

We’ve picked out 5 locations that we think are the most secure in the world. Behind their safe doors and locked vaults lie all manner of different objects and items.

1. Fort Knox – Probably the most famous gold deposit in the world, Fort Knox more than lives up to its reputation as one of the planet’s most impenetrable places. Fort Knox holds over 4,000 tons of America’s gold reserves. It is guarded by a nearby garrison of 30,000 soldiers, reinforced granite walls and contains a 22 ton safe door that requires a lengthy code to open. The code is split up and spread amongst various staff members for the utmost security!

3. Svalbard Global Seed Vault – In the event of Armageddon occurring, our hopes of salvation lie buried 390 feet under a mountain 620 miles south of the Arctic. Located on the Svalbard islands, The Global Seed vault contains samples from 500,000 species of the Earth’s plants. It’s buried so deep it can avoid nuclear blasts and earthquakes, but is also 430 feet above sea level. The seeds themselves are kept firmly behind four huge steel doors, so our plants are safe in case of global disaster!

4. Iron Mountain – Iron Mountain is reminiscent of the huge room full of different crates at the end of Indiana Jones and The Raiders of the Lost Ark. It contains numerous artefacts and items of considerable cultural value such as Edison’s original patent for the light bulb. Iron Mountain houses 1.7 million square feet of vaults and safes, and is guarded by armed guards who inspect visitors so thoroughly, it would make your average airport security guard blush.

5. Federal Reserve Bank Of New York – As seen in Die Hard 3, the Federal Reserve Bank of New York contains around  7,000 tonnes of gold, worth approximately $415 billion. To keep the 540,000 gold bars secure, the vault is located 80 feet below ground, surrounded by natural rock on all sides and contains a 90­ ton steel door. Currently, it is reputedly the largest gold repository in the world (though this cannot be confirmed as Swiss banks do not report their gold stocks). 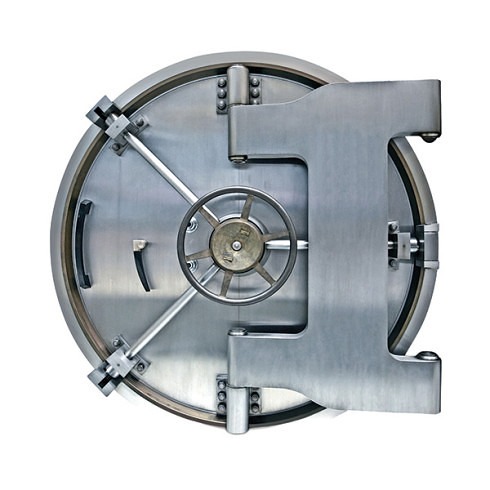 Securing valuables with a vault from Insafe

If you are looking for a high quality, tested, certified and approved vault, turn to Insafe.

Insafe supply and install vaults, strongrooms, cages and doors for projects ranging from under £20,000 to over £1 million. With resistance grading from Grade 3 to Grade 13. Additionally for further security we offer KB and EX grades to any resistance grading. KB gives diamond core-drill resistance and EX offers explosive resistance which are normally enhancements for the higher graded doors and strongrooms.

We provide a complete turnkey service from design and drawings to supply, installation and commissioning. All of our vaults, strongrooms, cages and doors are tested and certified to European Standards by LPCB and/or VDS.

Find out more about our Vaults & Strongrooms here!

Insafe is excited to be featured in the latest issue of Professional Player Magazine. Professional Player is a high end magazine written and designed exclusively for professional footballers. The quarterly publication covers what’s happening on and off the pitch, with features ranging from sports news and interviews with some of the biggest names in the industry […]

Insafe to Exhibit at The Security Event

Insafe are pleased to announce that we will be exhibiting at The Security Event at the NEC in Birmingham, 9-11th April 2019.  The Security Event is a brand new exhibition that was created for the commercial and residential market at the traditional home of the UK security industry.  Bringing together the world’s leading security brands with […]

What could be surprising about a safe? You basically use it to store your cash, jewels or any precious items that you own, lock it with a key or a code and that’s that, right?

Actually, there is more to safes than you might think. Here are 10 things you may not know about safes.

Ryan Mills is Insafe’s Director of Sales and has been with the company for 16 years. During this time he’s witnessed Insafe grow and adapt to the ever changing industry and expand into one of the UK’s biggest security companies.  In his role Ryan is responsible for making sure everything is running smoothly within the […]